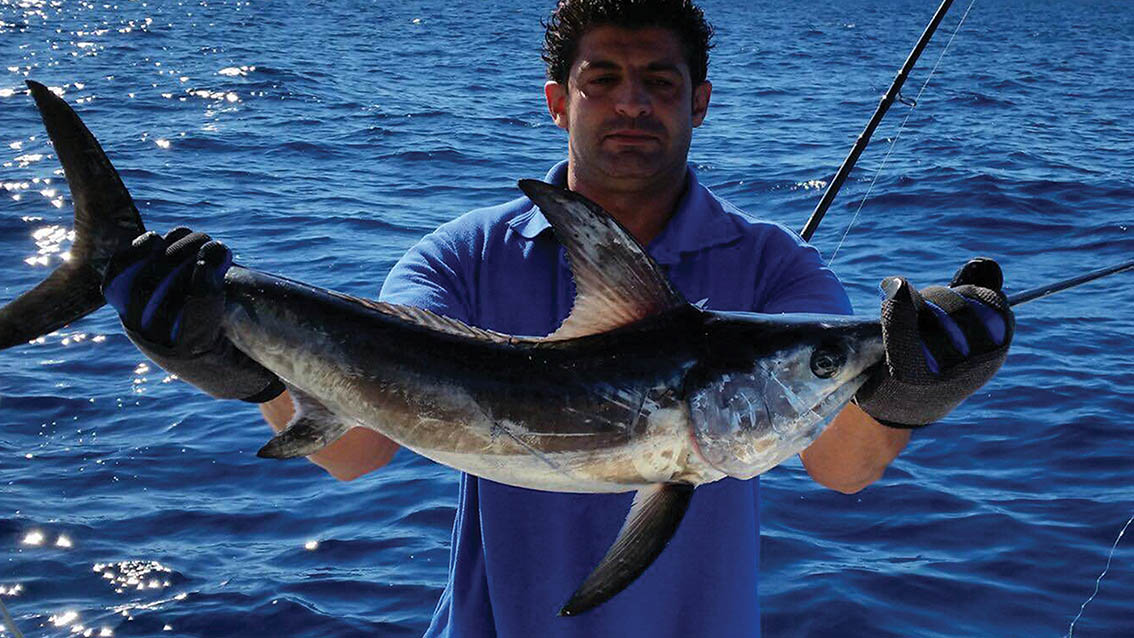 Swordfish fascinate many anglers because they are unique and difficult to catch. Scientifically the mythical fish are called Xiphias gladius, whereas the Greek Xiphias as well as the Latin gladius mean “sword”. Biologists in the 18th century respectfully called them “Xiphias imperator”, the “conqueror with the sword”. This sword is flat, very hard and can reach a third of the body length of adult fish. With this sword the fish kills its favoured prey, squid. However, it uses it also as an attack-weapon and spears everything with it, that comes supposedly too close. Not only his mortal enemy, the mako shark, but also whales and boats. In the British Museum, wooden planks and ribs of freight sailing ships are exhibited, into which the swords of the gladiator of the sea had penetrated them with attacks up to 90 cm deep.

Swordfish are relatively resident. During the day, they move in depths of over 300 m and look for food on the ground. At dusk and at night they hunt for squid and other prey close to the surface, in order to return to the banks and plateaus in the depth again in the morning.  We take advantage of this behaviour, during the day we drift and offer our baits over ground, up to 400 m deep. Long edges and plateaus are then our hunting grounds. At night, trolling close to the surface is often very successful with new moons. – With both methods we draw attention to our bait with a flashing light or a light stick. Swordfish also see this light from a greater distance: Among all bony fish they have the best vision and the largest eyes.

Do you find it exciting? Book Here an Unforgettable Deep-Sea Swordfish Fishing day in Mallorca (Alcudia).